In this this series of blog posts titled “Navigating Cloud DVR’s Murky Legal Waters,” we will first cover the copyright aspects of running a cloud DVR service and explain why some TV service operators choose to implement a private copy mode cloud DVR solution. In the second blog post, we will elaborate on the ramifications of copyright and some court rulings on the technical implementation of cloud DVR solutions and possible legally acceptable optimizations.

Over the last decade we have witnessed a technological evolution out of which cloud DVR solutions were introduced.

A cloud DVR solution in its simplified incarnation is really moving the recording and playback capabilities of set-top box digital video recorders (STB-DVRs) to equipment located at the TV service provider premises.

By doing so, it becomes possible for TV service providers to offer customers flexible storage quota, increased parallel recording, and enable additional services like catch-up TV. At the same time, a cloud DVR solution considerably reduces the investment and operational expenditure compared to using STB DVRs as illustrated in the graph here below. 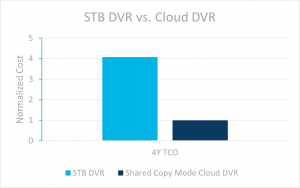 Although from a technical perspective it is quite straightforward, implementing a cloud DVR solution becomes quite challenging due to the copyrights restrictions typically associated with a TV service.

In this first post in our blog series titled “Navigating Cloud DVR’s Murky Legal Waters,” we cover the copyright aspects of running a cloud DVR service and explain why some TV service providers choose to implement a private copy cloud DVR solution.

When someone creates an original artistic work, such as a film or TV show, they are protected by copyright. Nobody apart from the creator has the right to make the work public or reproduce it.

This is defined in and governed by a country’s copyright law. Most countries have such a law, with the notable exceptions of Eritrea, Turkmenistan and San Marino.

In the context of cloud DVR, where we effectively extend the broadcast window and number of times the program can be watched, TV service providers must negotiate a carriage agreement with ancillary rights to include the channel in a cloud DVR service. One should also realize that there is no guarantee that the TV channel will be able to grant such a license because it is tied to license agreements with content providers. The latter might not agree with the cloud DVR use cases as it dilutes their monetization possibilities like the sale of DVD or VOD rights to other providers.

Negotiating such content carriage agreements is complex and quite time-consuming, and in many cases, it is also a very costly matter as the license cost is directly associated with the expected number of times a program is broadcast.

Leveraging a cloud DVR solution which supports monetization via ad replacement can help to indirectly reduce the licensing cost for such service, by for example sharing the ad revenue with the TV channel and/or the content rights owners.

Even though initially a TV channel might be able to provide a blanket carriage license agreement it might at one point source content from a new provider not willing to entertain such a cloud DVR license. Therefore, the TV service provider who implements a cloud DVR solution will need to have the capability to at minimal block out some programs from being recorded.

Due to the challenges associated with obtaining these carriage rights, TV service providers have been looking at possible ways around.

Most copyright laws have some language that defines the boundaries in which an individual person can make copies for personal use (Personal Copy Exception also known as “fair use”). However, as most of these laws date back to before digital technology became prevalent, they don’t address new digital use cases.

Consequently, there have been court cases where the legality of analog video cassette recorders (VCRs) and subsequently of the STB-based digital video recorders (STB-DVR) have been challenged on the same copyright grounds. But ultimately as:

It has been deemed by the courts that the copying taking place here is “fair usage” by the end-user and that there is no public performance taking place, consequently using a VCR/STB-DVR is seen as “personal use” and covered by the copyright law.

It should be noted that although copying for private use is permitted without explicit license agreement and payment, there are many countries that have implemented an indirect compensation mechanism for the rightsholders by form of a private copy levy.

A private copying compensation system is very common in Europe, with notable exceptions Cyprus, Ireland, Luxembourg, Malta, and the U.K. where such a system doesn’t exist.

Compensation systems can be found in Canada and the U.S., although these systems are more limited, compared with most European countries. In Canada, the Canadian Private Copying Collective (CPCC/SCPCP) can only collect on audio carriers. The U.S. has a system of private copying levies in place, in conjunction with the Audio Home Recording Act of 1992. In LATAM and APAC regions this is less commonly implemented.

In general, the fee is levied when the individual purchases the device with which or the media onto which the recording is made. Most countries now also have tariffs in place for STB-DVRs.

Here you can find an overview of the respective levies (in Euro) across 19 countries, from the “2020 Private Copy study” by BIEM, CISAC and Stichting de Thuiskopie, for the different media types, including STB-DVRs (See STB (500GB) column). 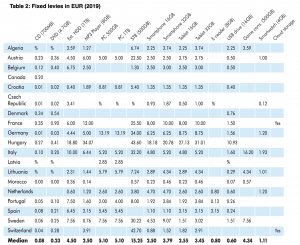 Copy for Personal Use and Cloud DVR

As media ownership shifted to access-based models, offering streaming content or temporary downloads instead of physical media, determining whether copies made in the cloud and made from (online) licensed (lawful) services are within the scope of private copying exception became subjects for the courts and updated copyright laws.

For example, in France on July 7, 2016, a new copyright law came into force covering this use case. Here, cloud DVR services (called NPVR) offering cloud storage now fall within the scope of remuneration for private copying. The so-called Rémunération Copy Privé (RCP) or Private Copy Levy is defined in function of the total storage capacity, or the total number of hours as shown in the table here below.

Equally, following a 2014 decision of the Swiss Federal Arbitration Commission on Copyright, a catch-up TV (replay TV) service now falls within the private copy exception and is to be limited to seven days and is subject to copyright levies. However, at the end of 2018, when tariffs had to be revisited, broadcasters demanded that the service would allow the broadcasters to determine if and when advertisements would be skippable.

After an 18-month negotiation, it was agreed that starting 2022 anyone in Switzerland will be able to watch television programs aired up to 14 days prior via a TV provider’s replay TV services. In addition, TV viewers will be able to determine for themselves how much advertising they want to see during a replay. This can, for example, be a choice between a short start advertising in front of the replay or three to four spots if the program is to be fast-forwarded.

For the European Union, the European Court of Justice (ECJ) has ruled in 2014 that cloud copies are within the scope of the private copy exception and subject to levies when made from legal sources.

However, for the specific case of cloud DVR, we are awaiting the ruling from a September 2020 filing to the ECJ from an Austrian court, which seeks clarity as to whether private copying via cloud computing, whereas the distanced servers are owned by a third person, should be subject or not to the private copy exemption and thus levy regimes too.

In this blog we covered the implication of the copyright law on operating a cloud DVR service.

Based on the discussion, it is evident that TV service providers should obtain carriage agreements with ancillary rights that cover the cloud DVR use case from the respective copyrights holders.

As this can become prohibitively expensive, in terms of obtaining and managing, TV service providers have been seeking to exploit the “personal use” exception typically found in copyright law.

Only a limited number of countries currently have a copyright law in place that addresses cloud DVR in context of the personal copy exception. However, this exception is then tied to an implicit payment mechanism for the rights holders under the form of a levy.

In many other cases, copyright holders, broadcasters and most governments are still figuring out a balanced legal and commercial framework for cloud DVR. Consequently, TV service providers wanting to implement a cloud DVR service today will need to operate within the existing legal copyright framework and be prepared to deal with changes thereof.

In the follow-up blog post “Implementing Private Copy Cloud DVR” in our “Navigating Cloud DVR’s Murky Legal Waters“ series, we will dive deeper into the deployment considerations when implementing a cloud DVR solution that exploits the private copy use exception of the copyright law. 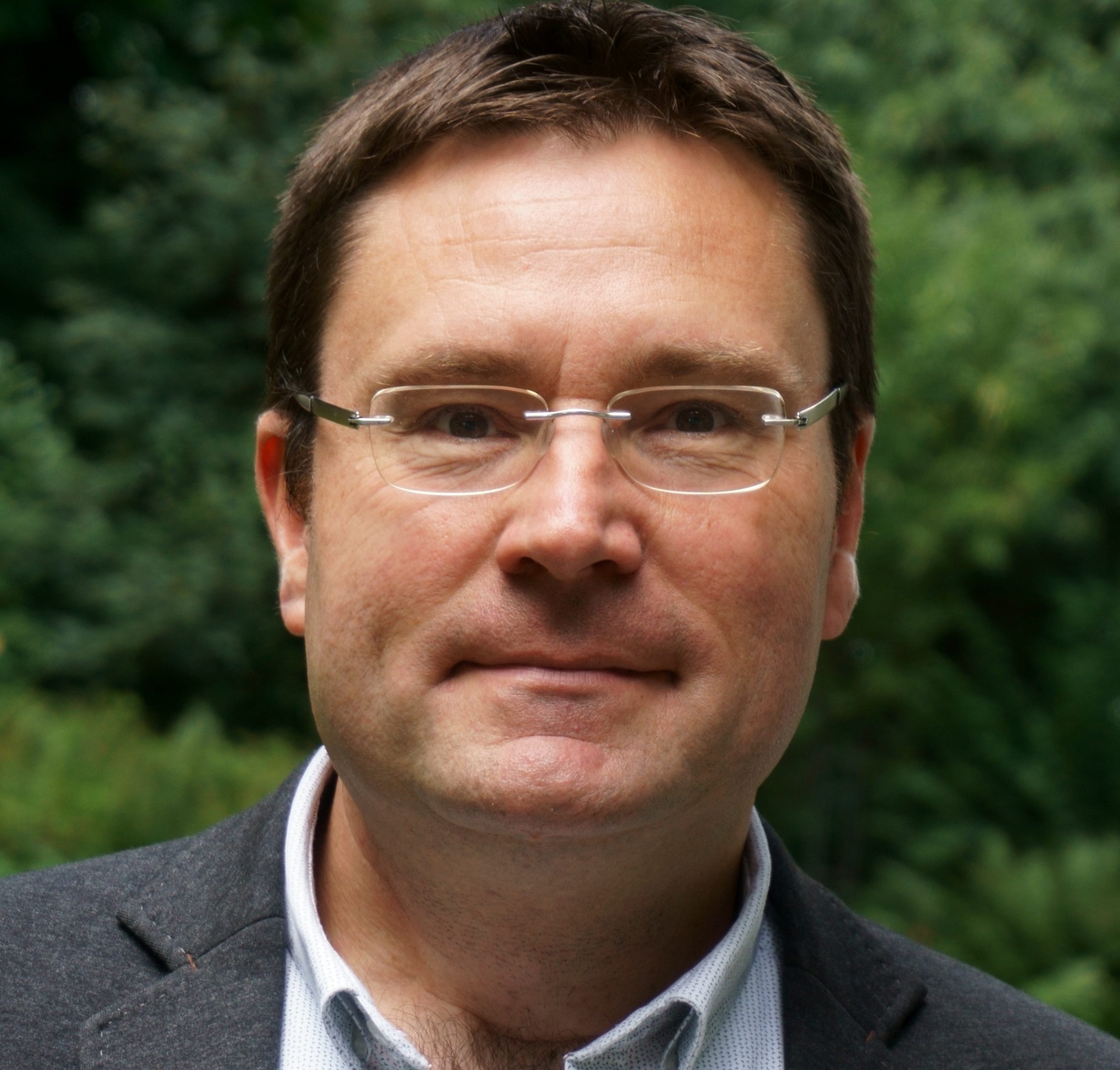 Pieter Liefooghe is a Business Development Director at Broadpeak. Before joining Broadpeak Pieter held the SVP Product and Operations position at THEO Technology, a video playback component vendor. During his three years at Ericsson/Mediakind he was in different roles, notably Media Delivery Solution Area CTO covering primarily their Cloud DVR solution. In the 11 years prior, at Alcatel-Lucent/Nokia/Velocix he was active in different organizations and roles, lastly as the Product Management Director responsible for their Cloud DVR solutions. Prior to joining the corporate world, he was active for over 10 years in academia doing applied research in the field of telecommunications and streaming media in particular. Pieter holds a PhD in Applied Sciences from the Vrije Universiteit Brussel, Belgium and an Engineering degree from the same university.
back to Blog Index