In ABR (adaptive bit rate) streaming, the player controls the quality (bit rate) selection function of its maximum available bandwidth estimation based on the buffer level. The player has one objective: to maximize the quality of experience (QoE) perceived by the user while avoiding rebuffering. Bandwidth estimation performed by the player is usually based on HTTP (application layer), which does not work properly in some situations like with CMAF low latency. With the latter, a video segment is split into chunks that are coded and transmitted continuously in such a way that a segment is sent and received roughly at the video bit rate. Relying on the buffer level is not really feasible as with low latency the aim is to have the buffer as small as possible. In order to mitigate this problem, several player-side algorithms have been proposed in the context of Twitch’s ACM MMSys 2020 Grand Challenge dedicated to the problem.

The results showed a clear advantage of using S4S streaming in almost all situations.

The figure below shows the QoE score for the default dash.js client-side algorithm (stock), the two client-side “MMSYS/Twitch Grand Challenge” winners algorithms (L2A and LOL), and S4Streaming, our server-side algorithm. The QoE score is computed based on the formula provided for the challenge (find it here). The “double” figure represents the score computed with video representation bitrates that were 2 times greater than those recommended for the challenge (<=1Mbps). 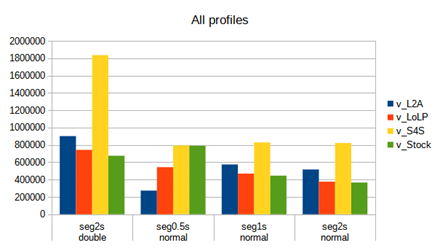 Guillaume Bichot joined Broadpeak in August 2018 as the head of Exploration team with a focus on addressing and developing innovation. Prior to working at Broadpeak, Guillaume was a principal scientist at Technicolor and Thomson, where he led international teams and activities related to image and networking. His areas of expertise include video streaming, IoT, wireless, broadband access, cloud networking NFV, and virtualization. Guillaume has contributed to many collaborative projects, standardization bodies, and authored numerous papers at industry conferences.

Lisa Gernez is an R&D engineer at Broadpeak.  Lisa has a master’s degree in computer science from the University of Rennes 1 (ISTIC).  She ported the S4S protocol onto the dash.js player and contributed significantly to the test campaign. She is currently working on video streaming processing adapted to the cloud.